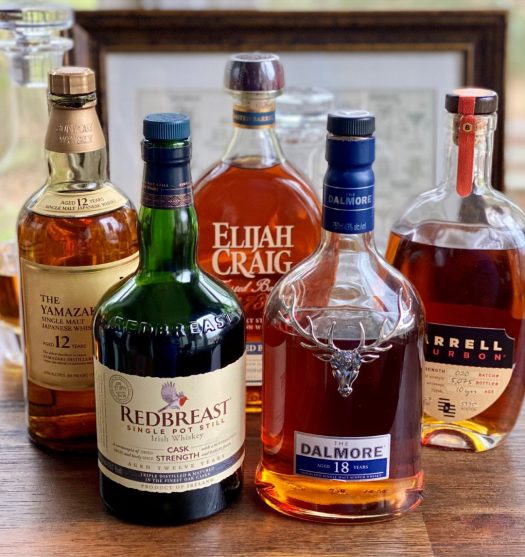 Not sure what whiskey to buy, whether a gift or for yourself? Consider a whiskey subscription club, which takes some of the hassle out of the equation for you and sends you samples on the regular in exchange for a recurring fee.

The catch? Instead of picking a whiskey, now you have to pick the right club, and there are lots of them to choose from. Today we look at nine of the best and most interesting, but before we get to the details, here are some broader things to ask when evaluating these options:

Got the answers to all those questions in mind? Let’s dig in and check out 10 of the most noteworthy whiskey-of-the-month clubs available today.

What you get: 3 50ml bottles of different whiskeys, plus a full 750ml bottle of your choice. Quarterly.

Who it’s best for: Flaviar runs one of the most popular subscription offerings, and for good reason: The value provided is pretty incredible, especially if you go for the year-long option. That said, most of this value is courtesy of the bonus 750ml bottle you get each quarter (each is valued at about $50), so make sure your selection counts. Flaviar’s tasters come in their own test-tube-like packaging, which are sent “blind,” their identities concealed in a card inside the box that reveals their identity only when you’re ready. Each flight is also grouped along a pretty tight theme — so expect three peated Scotches, or three Texas bourbons, for example. Flaviar also has plenty of non-whiskey options that you can explore, as well. Icing on the cake includes bonus sips that you’ll get from time to time, as well as invites to special events, like the recent WhistlePig HomeStock blending event. Great stuff for seasoned drinkers and newbies alike.

How to get it: flaviar.com

What you get: 10 50ml bottles of different whiskeys, plus a Glencairn glass and a small notebook. Every 2 months.

What it costs: $90 per box, plus shipping, every 2 months. $90/box as a bimonthly subscription (free shipping), or $520/year paid up front for 6 bimonthly boxes. Free shipping.

Who it’s best for: My sample box was filled with whiskeys the bulk of which I’d never heard of (which is saying something). Nine were American craft (or at least far-from-mainstream) bourbons, with one Canadian whisky in the mix. Some highlights included a sample of Clyde May’s Alabama-style whiskey, the Texas-distilled, grain-to-glass Alamo Bourbon, and the racy 117-proof Boone’s Bourbon. There was plenty of fun stuff in the mix here — Port-finished bourbon, why not? — that I could fully see spending a few weeks sampling a different spirit each day just to let the stories unfold. If you’re a fan of off-the-beaten-path whiskeys, and don’t mind a little funk in the mix, you’ll get each of these samples for just $9 each, which is pretty reasonable considering you probably won’t find most of them anywhere else.

How to get it: shotsbox.com

What you get: (At least) 4 50ml bottles of different whiskeys, plus a Glencairn glass and whiskey stones, in a reusable wooden crate. Monthly.

What it costs: $59 for a single box each month, plus shipping from Europe (about $30). Long-term subscriptions are available, but at the same equivalent monthly price.

Who it’s best for: Four samples may not sound like a lot, but these are all solid bottlings. The three single malt Scotches in my sample kit — Glenfiddich 18, Glenlivet 15, and Bunnahabhain 12 — will probably be quite familiar to any drinker, but the addition of a Spanish whisky, DYC 8, was a unique and fun twist on an otherwise straightforward collection. That said, Scotch seems by far to be the overwhelming focus here, so single malt fans should find everything to their liking. Some caveats: Whisky Flavour is based in Portugal, and shipping from Europe can be exceedingly lengthy due to pandemic-related lockdowns, at least for now. As well, you’re paying about $15 per sample, which isn’t cheap, and shipping will probably add another $7 to each dram. Here’s some good news: Use code drinkhacker when you purchase your kit (link below) and you’ll get 15% off everything, forever (including both one-time purchases and recurring subscriptions).

How to get it: whiskyflavour.com

What it costs: $69/month per shipment for the bourbon or whiskey clubs, $79 for the Scotch club. Shipping is extra (about $15/month). 3 to 12 month terms, but no discount for longer terms.

Who it’s best for: No miniatures here. (The company used to offer minis, but doesn’t any more.) Mash&Grape sends you a full bottle of whiskey each month, and that’s it. There are three different clubs, one focused on bourbon, one on Scotch, and one on the more general whiskey category, which includes a little bit of everything around the world. Sample selections from recent months are encouraging, including offerings from Barrell, Redbreast, and Kavalan. The pricing isn’t bad considering what you’re getting — the only catch, of course, being that you don’t get to choose. If you like a bargain but don’t mind a little mystery, this is a decent way to stock up your bar over the course of a year.

How to get it: mashandgrape.com

What you get: 2 750ml bottles of different whiskeys. Monthly.

Who it’s best for: Caskers is owned by Flaviar, so naturally this club was built to offer a different type of experience, focusing on regular shipments of high-end whiskeys — bourbon and craft whiskeys for the American club; Scotch, Irish, and more on the world side. There’s a lot of solid stuff in the mix here, including I.W. Harper, Glenfarclas 17, and lots of WhistlePig selections — but as with any club, these offerings are fluid and change over time. Ounce for ounce, pricing is roughly the same as you’ll get from Mash&Grape — just remember you’ll be getting twice as much booze.

How to get it: caskers.com

What you get: For your membership fee: Nothing! Just access to the SMWS store.

What it costs: $99/year. Discounts are available if you purchase a bottle with your membership, saving you about $49.

Who it’s best for: The SMWS, a longtime independent bottler of Scotch, is essentially the OG of whisky clubs, but unlike every other club on this list, membership only gets you the privilege of purchasing from them, plus errata like access to their private Members’ Rooms in Edinburgh, Glasgow, and London. SMWS’s legacy of spirits is massive and its offerings are always in flux, with bottles coming and going quickly. Almost all of them are single cask releases, with only a few hundred bottles available. We’ve reviewed a lot of them over the years, and tasting a SMWS expression is always a treat — even if it is invariably a one-off. A SMWS membership doesn’t really make the best gift — since booze isn’t actually included — but is best suited for Scotch nerds who really want to dive deep into the unusual, the obscure, and the one-of-a-kind.

How to get it: smwsa.com

What you get: 1 bottle of barrel-pick whiskey. Quarterly.

What it costs: About $80 (always under $100) per quarter, plus $14 shipping. Pricing varies based on the whiskey of the quarter.

Who it’s best for: Bitters & Bottles has a unique focus: All of its Whiskey Club picks are single barrel exclusives, each a limited release curated/selected by Bitters & Bottles, so every quarter you’re getting something truly unique. All picks are American whiskeys, so prepare for a lot of bourbon, though recent selections from the likes of Joseph Magnus and Woodinville mean you’re apt to get product from well outside the usual suspects. It’s not overly expensive considering what you’re getting, and shipping is decidedly reasonable, too — but if you click the link below you’ll get a code that gives you 10% off. Worth a look for bourbon fanatics.

How to get it: bittersandbottles.com

What you get: Typically 1 bottle of whiskey. Monthly.

What it costs: $149 per month, same price for American whiskey or world whiskey. Free shipping.

Who it’s best for: Two clubs, both very straightforward: One is only American whiskey, one includes whiskey from all around the world. We reviewed an earlier version of this club a couple of years ago, but Spirits Network has since ditched that concept and is instead focusing on booze. Recent shipments have included some interesting picks: Widow Jane Lucky 13 Single Barrel Bourbon and Hillrock Double Cask Rye Port Finish in the American club. Singleton 18 & Toki (both shipped together) and Old Pulteney 18 in the world whiskey club. This is a very expensive club, but you can take some of the sting out and get 25% off your first month with code SIP25.

How to get it: spiritsnetwork.com

What you get: 1 or 2 750ml bottles of different whiskeys, plus food pairings and glassware. Every 2 months.

Who it’s best for: As the name suggests, Craft Whiskey Club focuses on craft whiskey — and not just American stuff. Recent offerings have included bottles from Westland and Scotland’s Raasay, including some whiskeys I’ve never even heard of. Right now, Craft Whiskey Club is under a “Balcones takeover,” with a collection of single cask special editions in the mix. Alas, you don’t get to choose which one you get. Craft Whiskey Club is definitely on the pricey side, but for fans of products well off the beaten path, it might be worth the investment.

How to get it: craftwhiskeyclub.com

What it costs: $84 to $199 per shipment, billed monthly, shipping included.

Who it’s best for: Taster’s Club is another full-bottle-every-month provider, and it offers a bevy of different options, ranging from the (mixed) Whiskey and Bourbon clubs (both $84/month) to the rarities-focused Scotch PRO club ($199/month). Recent selections in the Whiskey of the Month club include some unexpected options like Cedar Ridge and Wigle, and bollings from Buckshee and Vapor Distillery in the Bourbon club. The Scotch selections seem more straightforward and expected — Bunnahabhain 12, Dalmore 12. I haven’t received any shipments from Taster’s Club, but the big issue here seems to be value: $99 for a bottle of Bunnahabhain is awfully high, even if shipping is free.

How to get it: tastersclub.com