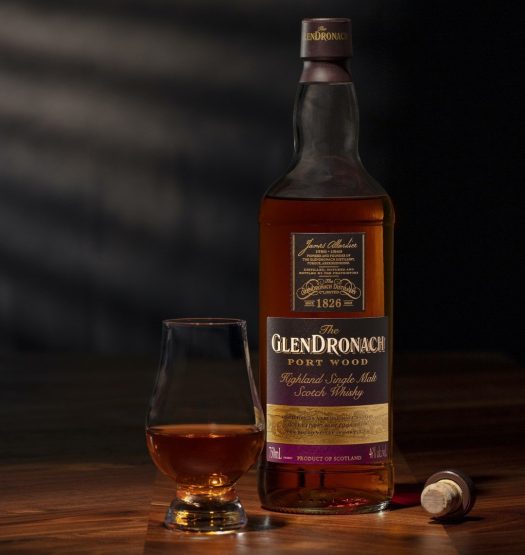 GlenDronach is hitting the market with a new full-time expression as well as four new expressions from its single cask Cask Bottlings line, denoted as Batch 18. Up first we have GlenDronach Port Wood, which should be self-explanatory (though more details follow below). The four bottlings from the Cask Bottlings Batch 18 line are all very different releases, each vintage dated and aged in a variety of types of wood. These are highly limited releases, so be sure to grab them quickly if something catches your eye.

GlenDronach Port Wood – Primary aging in Pedro Ximénez and oloroso sherry casks, followed by a second maturation in Port pipes. No age statement. This is much more intense and brooding on the nose than expected, offering notes of matchheads, mushroom, turned earth, and barrel char dominating. The sweetness and citrus of Port and sherry are both absent, though the palate livens things up with notes of baking spice, almond nougat, and black pepper. While rather scattered, it’s got enough intrigue to merit sampling a dram, but the sweetness normally endemic to these wine casks never manages its way through to the finish, which lingers on the tongue with too much youth plus an echo of asphalt. 92 proof. B / $92 [BUY IT NOW FROM DRIZLY]

GlenDronach Cask Bottling Batch 18 2008 Cask 3017 – 12 years old, aged in an oloroso sherry puncheon. The nose is bold and aggressive with classic sherry elements, nutty and rather sharp, but tempered by a gentle, slightly sour tamarind note. Some charred, almost smoky, elements are evident here, too. On the palate, citrus notes hit hard; the whisky is aggressive and a bit brash, still finding its feet. Water helps temper the beast, letting the finish showcase its sweeter side, with vanilla and some red berries in the mix. Slightly peppery on the fade-out, even with dilution. Overall the whisky doesn’t really deviate from expectations, but fans of cask strength sherry bombs may nonetheless find this a worthwhile investment thanks to its depth of flavor. 119.6 proof. 628 bottles produced. B+ / $120 [BUY IT NOW FROM DRIZLY]

GlenDronach Cask Bottling Batch 18 2005 Cask 1928 – 14 years old, aged in a Pedro Ximénez puncheon. This is a seductive whisky with a boldly nutty nose that’s infused with coffee bean, cinnamon, incense, and a subtle petrol note. Sweeter on the palate than expected, the lively sherry bomb pops with cherry cola, spice caramel, and Mexican chocolate notes. There’s a certain austere rug shop character that makes this feel more mature than it is, but that’s not a bad thing. The finish is sunny and bright, hinging on lingering caramel touched with white pepper. The big winner in this lineup. 116 proof. 612 bottles produced. A / $150 [BUY IT NOW FROM DRIZLY]

GlenDronach Cask Bottling Batch 18 1994 Cask 5287 – 26 years in Port pipes have done a number on this whisky. While Port-finishing regularly leads to a sweet, fruity character, here a quarter-century of it has led to a bit of a breakdown, imbuing the nose of the whisky with a pungent and oily petrol note that verges on paint thinner at times. The palate is similar, giving way eventually to prune, wet leaves, and a load of licorice, and it’s downright unrelenting, taking you to a finish of turned earth, asphalt oil slick, and bitter herbs. One-note and overwhelming, this experience may resonate with some, but I found it quite off-putting and unaccessible. 102.6 proof. 638 bottles produced. C- / $415 [BUY IT NOW FROM DRIZLY]

GlenDronach Cask Bottling Batch 18 1993 Cask 7102 – 27 years old, aged in oloroso sherry puncheon. Another classic, winning whisky, this leathery, deep brown spirit offers a classic sherry composition, starting with a leathery, nutty nose that’s laced with cloves, tobacco, and a deep, sultry prune character that keeps its sweetness well hidden. The palate is a monster of flavor, austere and rich with spiced chocolate, caramel, cola, and plenty more of that leathery, tarry, sometimes funky character. Notes of gingerbread and dried fruit percolate on the finish, but it’s that dusty old leatherbound library book — all part of the classic old and austere sherry-aged playbook — that really resonates for ages as it fades out. 102.8 proof. 633 bottles produced. A- / $600 [BUY IT NOW FROM DRIZLY]