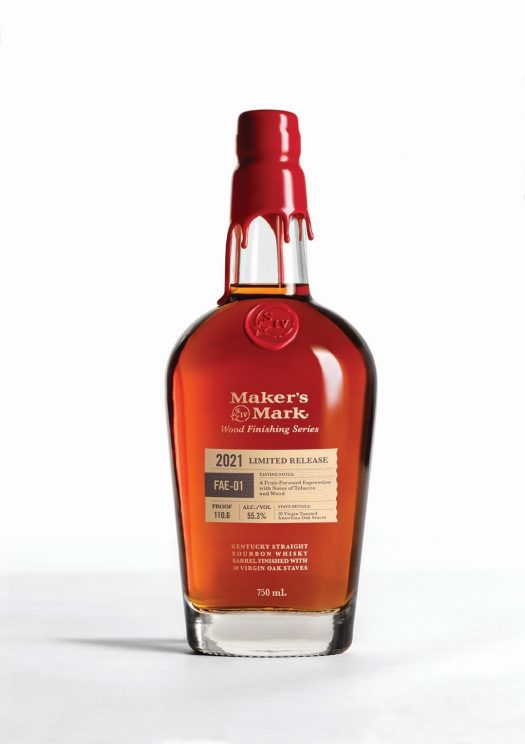 For starters, it’s the first of two FAE releases. FAE-02 will arrive this fall. FAE-01 and -02 will be part of year three of Maker’s Mark’s Wood Finishing Series, which revolve around unusual wood treatments that the distillery began when it launched its Private Selection line back in 2015, wherein customers looking for a bespoke barrel can choose from a variety of finishing staves to be placed in their whiskey, making for a truly original spirit.

More on that in a later post, but for now let’s talk about FAE-0:

The first 2021 Limited Release, FAE-01, uses an American oak stave that is seared on one side and left raw on the other to amplify some of the signature dried fruit and oak flavors that Maker’s Mark is known for. The classic Maker’s Mark Bourbon derives these tasting notes from naturally retained elements of barrel char and organic compounds called fatty acid esters (FAEs), which are responsible for both fruity tones and texture variations. Each side of the FAE-01 stave draws out different characteristics of these two flavor components – the charred side offers dark leathery tobacco notes, and the raw side yields fresh fruit, the two of which come together to create intense barrel-aged fruitiness. While 2021 Limited Release: FAE-01 focuses on drawing out specific flavors, 2021 Limited Release: FAE-02, arriving later this year, will be defined by its rich, weighty texture.

As a reminder, the FAE stave is not a barrel stave but rather a finishing stave that is immersed in the barrel after primary aging. Ten of these staves go into a standard charred barrel during finishing. Either way, the use of raw wood is unusual, and 10 extra staves is a lot. Anyway, let’s give it a try.

As you might expect, the aromatics here run heavily to wood. It’s lumberyardy, beefy, and peppery all at once, burlier than the typical Maker’s Mark by a country mile — a fact that I confirmed by comparing it to a fresh bottle of Maker’s Mark Cask Strength. Dusky and musky as it develops, I caught a distinct cardamom note as the whiskey opened up in the glass.

The palate isn’t immediately surprising, led by brown butter and ripe banana, plus more wood. There’s a curious Asian spice note, a companion to that cardamom aroma, that comes through here, but while it feels exotic on the nose, it’s a bit unbalanced on the tongue. Water is a huge help here, as FAE-01 is supremely hot at full proof. This helps to bring out fruity sweetness and a more effusive, traditional baking spice character that pops more clearly, and much less of that Eastern spice note. There’s still some grittiness on the finish, and a lingering, somewhat burly note of cloves. Again, water helps.

Overall, this experience doesn’t offer nearly the excitement of 2020’s limited release (which landed a spot as one of our top whiskeys of the year), but it’s unique enough to merit tasting at least once.