The new Portobello Road Savoury Gin (42% ABV) has been designed for foodies and restaurateurs.

The sugar-free expression is recommended served with dishes as an alternative to wine or as an apéritif. It can also be consumed in a Martini.

The brand said the new gin was created as a ‘rebellion’ against the trend for ‘sweet, fruity’ pink-flavoured bottlings that are made without any traditional gin botanicals, such as juniper.

Co-founder Jake Burger said the pink-flavoured bottlings currently on the market have flavours that “are reminiscent of the candy shop or the dessert bar, and which typically pack a lower alcoholic punch”.

He said: “We don’t want to stomp on sweet gins, there is clearly a market for them and many are very tasty indeed, and of course, the addition of sugar or fruit to gin is nothing new – indeed throughout history gin was a sweeter product for far longer than it has been a dry product.

“However, many of the tautologically named ‘flavoured gins’ we now see on the market today are, in our humble opinion, not really gin at all. They are fruit liqueurs or fruit vodkas, where the juniper – if it’s noticeable at all – is certainly far from being the predominant flavour.

“We believe it’s important to protect the character of the spirit that has been such an intrinsic part of our nation’s history, whilst still embracing innovation. So that’s why we created Portobello Savoury, a new style of gin, but one that respects the traditions of the category.”

The expression is the seventh gin in Portobello Road’s core collection, which includes 4.2% ABV Temperance.

The gin will be available from June 2021 on Ocado and in the on- and off-trade through UK distributor Mangrove. It is priced at RRP £35 (US$49) per 700ml bottle. 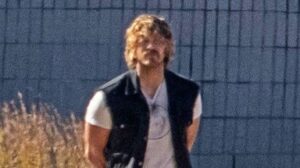 Chris Pratt Is Unrecognizable With Wild Mustache On Set Of ‘The Electric State’ With Millie Bobby Brown: Photos
Posted onDecember 1, 2022