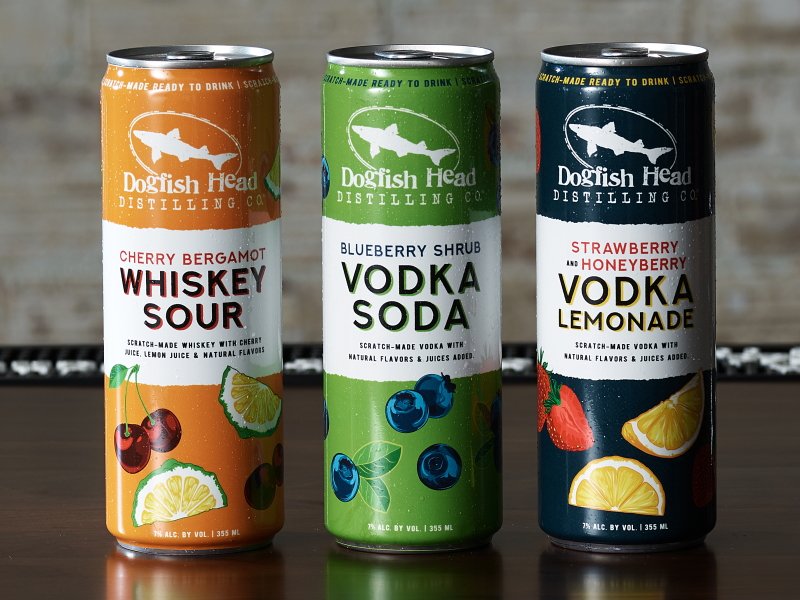 Dogfish Head has been in business as a brewery in Delaware since 1995, and later it moved into distilling with a range of whiskey, vodka, gin, and rum. They were early proponents of bottled cocktails, back in 2017, and earlier this year entered the canned cocktail revolution. One advantage they have is that they already distil their own spirits, from which these three canned cocktails are made.

Dogfish Head Blueberry Shrub Vodka Sour – We recently reviewed a Blueberry Vodka Sour in a box from BarBox, and were very impressed so looked forward to the Dogfish Head version, especially as even before it was released it won best ready-to-drink cocktail at the L.A. Spirits Awards. Dogfish infuse their house vodka with blueberries, then macerate the spirit with balsamic and red wine vinegars to make a shrub, and finish the cocktail off with soda water.

The cocktail is a lovely deep blueberry color, and the nose is a fairly strong mix of sweet and sour. On the palate, though, I have to disagree with those L.A. judges. Taste is a personal thing, but to me this was mouth-puckeringly sour, explaining why you don’t often find vinegars in canned cocktails. The blueberry sweetness partly redeemed it, but we were glad we only had one and not a 4-pack. Bronze medal. B- [BUY IT NOW FROM DRIZLY]

Dogfish Head Cherry Bergamot Whiskey Sour – The classic Whiskey Sour is of course bourbon whiskey, a syrup for sweetness, and some lemon juice to provide the sour element. The Dogfish take is to get the sweetness from bergamot oranges and the sourness from tart cherries plus their own house sour mix. First they distil their own whiskey with the cherry and bergamot, and then mix it with the sour mix.

When poured it looks like a light red ale, and on the nose you could almost be sniffing a fragrant ale, so strong are the floral notes, with gentle hints of the sour cherries in the background. On the palate the sourness strikes first, as it should. Those cherries are definitely tart, but not enough to make you pucker on this one. The whiskey also draws in oak and vanilla from the barrel, with some honey sweetness and orange citrus. It’s a well-balanced cocktail that you’d be happy to be served in a bar at three times the price of a can. Of these three, this gets the Silver. B+ [BUY IT NOW FROM DRIZLY]

Dogfish Head Strawberry and Honeyberry Vodka Lemonade – Our personal Gold Medal goes to this wonderfully subtle cocktail creation, which made us feel we were bellied-up to a bar and had watched the bartender lovingly assemble it. Dogfish infuses its vodka with local honeyberries, and then macerates the mixture with strawberries, before blending the result with their house lemonade.

The appearance is like a light rosé wine, and the nose has all the intrigue of a good rosé too. It shows a delicate strawberry sweetness, a sourness from the lemonade, again very delicate, and a definite ginger aroma, even though ginger comes nowhere near the cocktail. The palate totally delivers on what the nose promised, with everything being very understated. First up is that unexpected light ginger spice, counteracted by the hint of strawberry sweetness. Swirl it around a while and the nose gets you again, while a lemony citrus also becomes more evident on the palate. This is one to sip and savor, till suddenly it’s gone and you want another. A- [BUY IT NOW FROM DRIZLY]

Everything You Need for a Backyard Movie Night