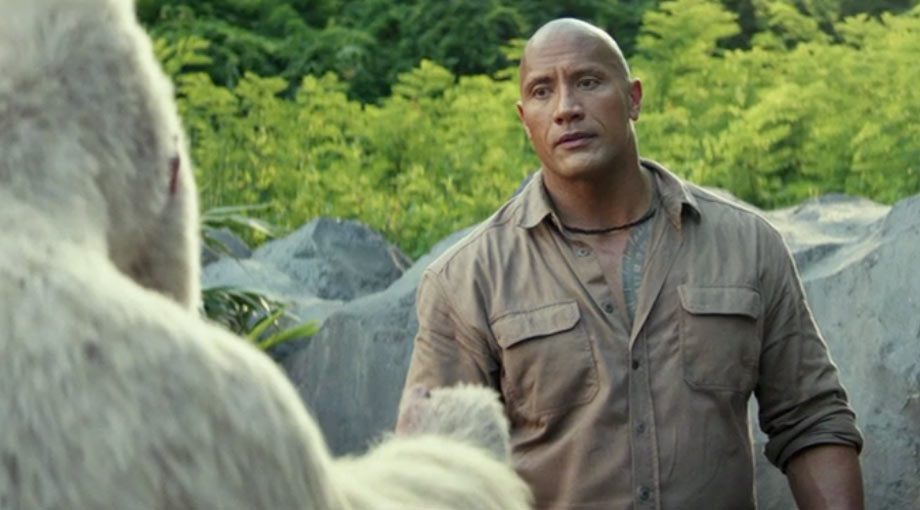 Davis Okoye (Dwayne Johnson) is passionate about his job at Everglades National Park, particularly with regards to an intelligent ape, his best friend, named George. One night, some kind of missile hits George’s enclosure which, upon inspection, sprays him with an unknown substance. The next morning, Davis arrives to find George cowering in his cave in obvious fear and pain, and Davis realises he has grown at least two feet since he last saw him and his weight has almost doubled.

With the help of scientist Dr. Kate Caldwell (Naomie Harris), they find the object that caused George’s transformation, and deduces that it’s part of some genetic editing technology being developed by the government. Of course, given that it’s managed to find its way into the home of George – who, incidentally, is displaying more and more unpredictable behaviour – that means there’s likely to be other ‘edited’ animals out there, something like… a 30-foot wolf, or a gigantic crocodile.

Davis protests about George being taken away by the military for testing, but this now-outsize ape can certainly take care of himself and is not about to become a science experiment if he can help it. But there might be a chance for Davis to get his friend back; there’s talk of an antidote for the technology being created and it soon becomes clear that Davis is the only person willing to chance it than execute the innocent animals.

Paul Simon’s Wife: All About His 30 Year Marriage, Relationship With Carrie Fisher & More
Tamera Mowry ‘s Daughter Ariah, 8, Wants To Be Star Like Mom: I’ve Warned Her This Is ‘Work’ (Exclusive)
Why Pirates Producer Says “You Can’t” Kill Johnny Depp’s Role
How Tom Brady Feels About Celebrating Christmas Late With His Kids
Master P Tries To Make Peace With Son Romeo After Social Media Feud: ‘My Door Is Always Open’
Ads by Amazon