“YOUR PRESCIENCE IS A GIFT” 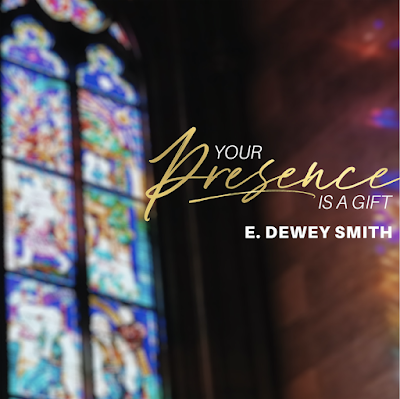 E Dewy Smith The prolific teacher and
Atlanta-based Senior Pastor deliver “Your Presence Is A
Gift” digitally on all streaming platforms. The beautiful ballad
will precede a full album due later this year. Speaking to the goodness of
always having God in our life “Your Presence Is A Gift” showcases
Smith’s deep, resonant vocals and establishes him as a bonafide contemporary
Gospel artist

During a major time of
grief, bereavement & loss, I had to rely on God’s presence totally,”
said Smith. “I have always preached about it … multiple deaths made me now
live it! Now I understand that even when we have to deal with the absence of
those closest to us God’s presence is a gift.”

An ardent supporter of
Gospel music, Smith, has regularly given gospel artists and worship leaders
from across the country a platform at The House of Hope, and he is now excited
to share his music ministry. The song is the first release under the newly
established Pebble Street Records, which will be home to his
forthcoming debut album and future projects from the House of Hope music
family. Based in Atlanta, Smith continues to build his multi-media brand that
includes film, television, content production, books, and music.

I am deeply excited to
launch my label Pebble Street Records,” Smith said. “It is the
fulfillment of a lifelong dream, an opportunity to pay tribute to my musical
roots and also to allow other gifted people to produce music! God gets the
glory.”

Dr. E. Dewey Smith is the Senior Pastor/Teacher
of The House of Hope Atlanta and The House of Hope Macon, and the new
expansion, The House of Hope West Pointe, “A Global Word Church.” A proud native
of Macon, Ga., he has been a minister of the gospel for 30 years. Smith
received a Bachelor of Arts degree from Morehouse College in Atlanta, GA;
graduated Magna Cum Laude with a Master of Science degree from Amridge
University in Montgomery, AL; and earned his Doctor of Ministry degree from the
United Theological Seminary in Dayton, OH. Additionally, he was inducted into
the Dr. Martin Luther King, Jr. Board of Preachers at Morehouse College as “”Distinguished Preacher.”” Dr. Smith has served on the
Board of Directors for the Morehouse School of Religion and the United
Theological Seminary and Bible College in Monroe, LA.

Dr. Smith is also professionally involved in
media, film, and television production. He has produced media and film for over
25 years. He served as a co-host on the first daytime, a faith-based panel talk
show produced by Warner Brothers in Burbank, California.

Dr. Smith is married to the lovely former Andrea
Fambro, his best friend of over 30 years. They are blessed with two sons:
Kamari Elijah and Kylen Isaiah.