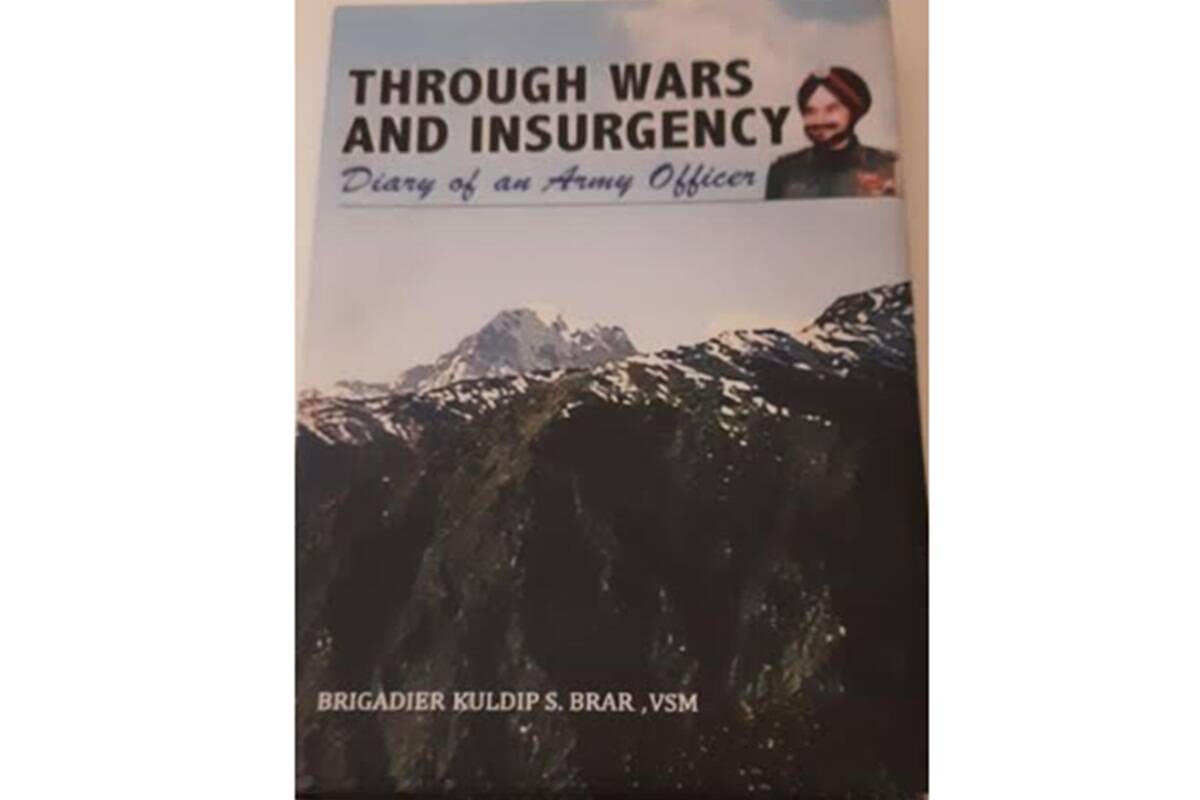 ‘Through Wars and Insurgency ,The Diary of an Army Officer’ is a fascinating read as it exposes the reader to varied experiences in combat and peace seen with the benefit of hindsight but at the same time at different levels. It also gives out the story of many other comrades of the author including some who are no longer there to tell the tale. This book not only recounts the events in an unbiased and frank manner but also provides a rare glimpse into the personal characteristics and qualities of remarkable men who selflessly serve the nation including the discomforts and dangers endured by them.

Brig Kuldip Singh Brar has had an outstanding career in the Army. Born in Sirhind part of Patiala State in 1935, his family moved to Malaya where he had his early upbringing, however, his family suffered in World War II due to the Japanese occupation and thereafter returned to Punjab after the war. The first few years of his life due to the war in Malaya, witnessing religious frenzy during the trauma of partition and rising influence of Communism created an imprint on his mind but also prepared him to face up to the vicissitudes of life with courage, fortitude and determination.

He was determined to join the Army, even though his education had suffered due to the families move from Malaya which, through sheer hard work, he completed but found he was overage to join as an officer. His burning desire made him join the ranks in ‘Hodson’s Horse ‘in 1954, one of the oldest Armoured Regiments with a rich and enviable history which Churchill called “one of the finest Regiments I have seen”. Brig Kuldip mentions their “able and competent officers” to include Major MMS Bakshi, who commanded the Regiment in the 1965 war and was awarded the MVC, the “lively young officers’ to include Gurinder Singh who retired as the Northern Army Commander, the GOC of The Armoured Division who also happened to be the ‘Colonel of The Regiment’ was General Daulat Singh “a hard driving professional who subsequently commanded the strategic Western Command”.

Brig Kuldip was then selected to go to the Indian Military Academy which he describes as “some of the most rewarding and enjoyable years of life” passing out in June 1960 amongst the top in his batch, and was commissioned into 4 Dogra which since its raising in 1940 had been almost continuously in operations. Called “The Fighting Fourth” it was deployed in Zunheboto, Nagaland ‘considered the toughest area for counter insurgency operations’. Its officers included the ‘sharp witted and dynamic’ Captain VK Sood, who later was one of his predecessors in command of 10 Dogra and subsequently rose to be the Vice Chief.

In his formative years, while still in the process of winning his spurs in counter insurgency operations the battalion was moved post haste to the remote Walong sector of Arunachal (then NEFA) to combat the Chinese Invasion of 1962. 11 Mountain Brigade had been given the responsibility to defend Walong after 5 Mountain Brigade, HQ 4 Corps and 181 Mountain Brigade all within quick succession.

On 14th November, 6 KUMAON’S brave attempt to capture Yellow Pimple could not succeed and Tri Junction, was in danger of falling to the Chinese. As 4 Dogra was flown into Walong in platoons and companies, the Brigade Commander, Naween Rawlley “ a thorough professional whose “courage and calm demenour” was inspirational throughout the battle, ordered their CO, Lt Colonel RS Pathania to relieve 6 Kumaon before the Chinese overran Tri Junction. 4 Dogra’s tenacious fighting and sacrifices at Tri Junction, the most dominating position of the entire defences and Firm Base in Walong sector bear recounting as 4 Dogra fought till the last and foiled the Chinese plan to trap the units of 11 Mountain Brigade. The Author’s account of this Battle remains a hallmark of this book. The Battalion under inspirational leadership and with unmatched spirit, fought against overwhelming odds at great heights with limited wherewithal and was nearly wiped out. In two days of intense fighting at Tri Junction and Firm Base, 4 Dogra sustained over 206 casualties: 109 braves made the supreme sacrifice including the Medical Officer Lieutenant Gautam Subba and Subedar Rattan Chand who refused to abandon their post, 23 were wounded and 74 taken as prisoners which included Major Grewal who had exhibited “exemplary leadership, great gallantry and concern for his men”.

Brigadier Kuldip’s indomitable spirit was at the forefront when he with a handful of men began a fighting withdrawal. The severe difficulties and privations suffered by this band of gallant soldiers, with no food, water and hardly any ammunition while traversing these remote and inhospitable Himalayan heights have been wonderfully illustrated. His courage and leadership got his men through a fourteen day ordeal filled with unimaginable hardship.

Subsequently, Brig Kuldip’s dedication, hard work and professionalism saw him rise up the rungs of service. He did his staff course in Australia, which by itself speaks highly of his capabilities. What stands out apart from the warmth of the Australians is a conversation during a Happy Hour that “it would strategically be ideal if India, Australia, Japan and the USA joined a pact to thwart the march of Communism in Asia and the Pacific.” That was 1969, I wonder if his feedback is being re- read in light of the Quad.

On return, he was posted as the Brigade Major of 48 Infantry Brigade part of 7 Infantry Division in Ferozepur, which was embroiled in severe fighting during the 1971 War. This chapter tells us about the capture of Sehjra Bulge in a bold, unorthodox and audacious plan which worked smoothly and successfully. The reader is acquainted with the ‘intelligent’ General Freemantle, Brigadier MCS Menon the” brave, conscientious and sincere” Commander and to the bravery of the battalions which included 6 MAHAR and 1/5 Gorkha Rifles , under the “ mature, competent ,battle hardened” Lt Colonel Suresh Gupta and the daring exploits of Major Sheel Puri. But what stood out is the coordination of all arms and services, the infantry attacks duly supported by armour, artillery and air. It was termed a “copybook attack “by The Sunday Times.

The Author rose to become a Brigadier and commanded 80 Infantry Brigade on the Line of Control in Kashmir “considered to be a hot button assignment” in the strategic Naushera Sector . Here amongst his various responsibilities he also made a presentation to the Fourth Pay Commission who were “thoroughly impressed “but “did not deliver on their promises made”.

On completion of his tenure he was posted to Army Headquarters where he was closely involved in the conduct of Exercise Brass Tacks. He credits General Sunderji as “the first ever Army Chief to who got the Indian Army to think along modern concepts and broader horizons”. He worked under General Rodrigues who went on to become the Army Chief who was “sharp, witty and an eloquent speaker with a wry sense of humour and believed to be General Sunderjis alter ego” and subsequently General Kartar Singh Gill “an upright, professionally competent General with the courage of his convictions” and General FT Dias, whom he had “known as a smart young Company Commander of 5/11 Gorkha Rifles “when posted in Sikkim. He was impressed with Major General Harwant Singh, of Red Land” who emerged as one of the most able divisional commanders on either side.”

The author would have risen further but superannuated on account of age. His subsequent contribution to national unity by gainfully training the vulnerable youth of the border districts during the Punjab militancy speaks volumes of his character.

What is most remarkable about the book apart from the accounts of the Battles of Walong and Sehjra is the ability of the author to remember the names of all the officers, JCO’s and men he served with and give us an insight into their personalities and the manner in which they conducted themselves. Those in the Army would be familiar with a large number of these officers but Brig Kuldip’s incisive remarks bring them to life.

The reader is acquainted with the “magnificent” Brigadier SS Maitra, who after having commanded 3/1 Gorkha Rifles in Congo was his Brigade Commander in Sikkim; and was “very sharp and extremely humane”. General Ashok Handoo whom he served with on multiple occasions was ‘a tough professional with a sharp mind ‘he had an “aerobic tongue but a large heart’. General Nirmal Vij served with him in 4 Dogra joining soon after the 1962 conflict as a ‘smart, intelligent and ever smiling’ young officer and we are witness to his progress up the ladder as the pride of the Dogra Regiment.

This book is easy to read and is strongly recommend  as it provides a remarkable insight into the life of a soldier, a glimpse of the ethos of the Indian Army and its history during a turbulent period when it was deeply committed in combating insurgencies in the North East, conflicts in 1962, 1965 and 1971 and subsequently the insurgency in Kashmir and Punjab. It also shows how soldiers cling with unbelievable tenacity to honour their commitment to the Nation placing the honour of their units above all. Brigadier Kuldip Singh Brar has done a great service to the discerning reader by publishing these memoirs.

(The reviewer is Indian Army Veteran. Email: jagatbirsingh18@yahoo.co.in Views expressed are personal and do not reflect the official position or policy of Financial Express Online.)