Following the release of her single “Ideas” last year and recent
feature on Jax Jones’ track “i
miss u,” Au/Ra has shared her enchanting new single “Dead Girl!,” released
today via Columbia Records. Written at home in Antigua, “Dead Girl!” is an
upbeat, alternative-pop song with a haunting yet playful melody that lyrically
discusses how it’s okay to feel different and not to judge ourselves for it. Watch the “Dead Girl” video 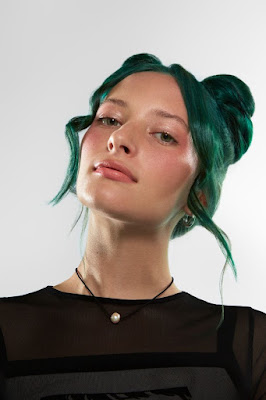 In speaking about the track, Au/Ra says: “I wrote ‘Dead Girl!’ when I was
feeling especially out of place when I came back home. Being away for a while
left me feeling disconnected from a lot of people. I think of myself as a
pretty introverted, sometimes anxious person – feeling out of place isn’t new.
I was so done with judging myself and feeling judged. I felt that especially
during high school, so I really channeled all that ‘grrrr’ energy into the
song. It’s about being okay with feeling different, unapologetically, and
feeling, in a sense, ‘dead’ to the people who don’t understand you.”

Ibiza-born to German parents and raised in Antigua, songwriter Au/Ra has
created a unique and powerfully emotive world, filled with innovative original
songs that explore the dark nature of humanity via strong melodies, evocative
song-writing and transcendent production. Her musical universe is one that is
expansive, exemplified by her impressive collaborations. Prior to “Ideas,”
Au/Ra released “Ghost” with Alan Walker,
which was part of the Death
Stranding soundtrack and has tallied over 32M streams on Spotify
alone. “Panic
Room,” her Platinum selling hit, which has since gone viral on TikTok
more than once, was later remixed by CamelPhat and stayed in the Top 40 for 9
weeks alongside being streamed 122M+ times on Spotify. Au/Ra’s recent feature
on Jax Jones’ single “i miss u” has sold over 5.5M copies worldwide and reached
#1 on the US Dance Chart. Watch their performance on BBC’s Little Mix
The Search.

Au/Ra’s astute, honest, and exhilarating song-writing and her real and relatable
storytelling is inherent in everything she does creatively. From concept to
fully realized product, every track and video has a distinctive plot, and
creatively, Au/Ra has a need to use art to make sense of the world around her.
Aware that her fans are all experiencing similar things, from mental health
issues and existentialism to her generation’s complex relationship with
social media, her music is the embodiment of Gen Z’s hopes and fears.

Look out for more new music from Au/Ra soon!