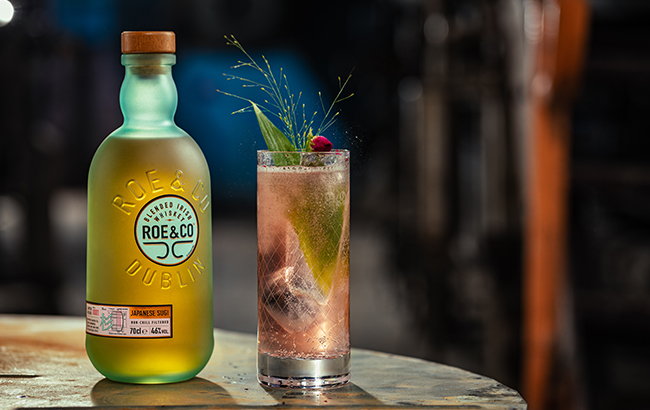 Diageo-owned Roe & Co has launched an Irish whiskey that makes use of Japanese sugi wooden and a ‘distinctive’ maturation course of, described as a primary for the class.

The brand new Roe & Co Japanese Sugi (46% ABV) whiskey is made with a maturation course of ‘by no means earlier than seen throughout the class’ and a uncommon wooden kind.

George Harper, grasp blender for Roe & Co, defined: “When trying to create distinctive flavours as a blender, we flip to uncooked supplies equivalent to wooden so as to add that depth and uniqueness to the liquid. Irish whiskey rules permit us to look past oak and so working with Japanese sugi wooden has been a very thrilling course of for us.”

To create the whiskey, the staff prolonged the size of the bungs (stopper) and added 5 of those to every cask. A complete of 10 casks have been laid down, with every mix tasted regularly.

The maturation technique is alleged to provide the whiskey notes of wooden spice and tropical fruits.

The Irish whiskey producer stated Japanese sugi was the proper wooden to make use of because of its porous nature, which imparts flavours rapidly. The wooden provides fragrant and perfumery qualities to the liquid.

Lora Hemy, head distiller at Roe & Co, added: “We’re fortunate to be a part of such a daring, and evolving trade that we wished to create one thing actually particular for this innovation and actually stretch our creativeness as to what we will obtain technically.

“Working with this wooden has been extraordinarily thrilling for me. This experimental whiskey has Roe & Co as its spine and is bursting with thrilling new flavour elements to go with.”

The whiskey is really helpful served neat, over ice or in Japanese-inspired Highballs.

The expression is solely out there from the Roe & Co Distillery in Dublin and thru the model’s on-line retailer for pre-order. Priced at €80 (US$69) per bottle, it’s out there for supply to the Republic of Eire and Northern Eire.