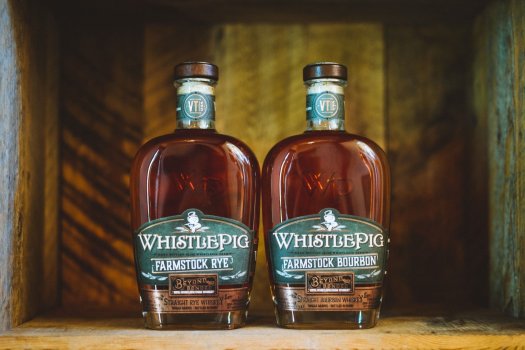 WhistlePig has been on an absolute tear these days, firing out new expressions left and proper to the purpose the place it’s exhausting to maintain up. Immediately we’re three new releases from the Vermont operation, together with a novel rye and a matched pair of 101-proof whiskeys, one rye and one bourbon (bourbon! from WhistlePig!).

Let’s attempt all of them.

WhistlePig Roadstock Rye – “Completed on the highway,” this distinctive rye is a collaboration between WhistlePig, Jordan Vineyard, and Firestone Walker Brewery, involving an “18-wheeler ‘Rolling Rickhouse,’ which took the ageing whiskey barrels and drove them 6,000 miles from Vermont to California and again — half of their authentic barrels, half in ending barrels from Jordan Vineyard which beforehand held a Bordeaux mix. As soon as in California, the opposite half was put into ending barrels from Firestone Walker — a mixture of Imperial Stout, Imperial Blonde Ale, and Experimental Ale barrels — earlier than the entire shebang was despatched again to Vermont, the place all of it was married and bottled. (There’s additionally a bit about an experimental whiskey-fueled Dodge Hellcat alongside the best way, however fortuitously none of that’s within the bottle.) Whew! So, what can we find yourself with? Effectively, it’s type of a melange of stuff. The nostril is, properly, bizarre. Actually meaty, with an undercurrent of asphalt, which I’m certain is totally coincidental to the entire Roadstock factor. Notes of nutty however chewy roasted chestnuts emerge with a while in glass. The palate has a doughy texture, with a definite chocolate notice rising shortly after, together with some dried cherry and craisin notes. All of that may be a good respite after the whiskey’s pretty savory introduction, although some toastier, barrel-driven components return because the end evolves — and a beefy, charred factor endures. You understand how you’re feeling after you’ve spent too many hours within the automobile, on the highway? Slightly beat down and dusty? That’s what I get right here. 86 proof. B / $73

WhistlePig Farmstock Rye Past Bonded – The Past Bonded whiskeys are 100% grain to glass whiskeys harvested, distilled, aged, and bottled on the WhistlePig Farm and Distillery in Shoreham, Vermont. 24 barrels of rye had been produced, constructed from 100% Remington Rye harvested from the ‘North Orwell 1’ subject of WhistlePig’s 500-acre Farm. The oldest barrel within the launch (of each the rye and bourbon) is 4 years, 8 months, and 14 days. These are single barrel releases. On the nostril, that is clearly some younger rye, exuberant with toasted grains, dried herbs, and a modest lumberyard factor. The palate doubles down: Chewy, semi-sweet grains, adopted by a ton of dusty oak, inexperienced herbs, and a naked trace of fruit, primarily pink apple. The end is pungent with inexperienced herbs and sawdust notes — nearly to a fault. I really like what WhistlePig is doing, however this has little resemblance to the well-aged sourced ryes it’s dropped previously — and at $100, is wildly overpriced in the interim, irrespective of how “traceable” it’s. 100.1 proof (therefore “past bonded”). Reviewed: Barrel #30033. B- / $100

WhistlePig Farmstock Bourbon Past Bonded – 51% Dent Corn and 49% Remington and Rifle Rye varietals harvested from ‘North Orwell 1’ and ‘North Orwell 2’ fields. 16 barrels produced. A wholesome quantity of corn helps give this whiskey extra nuance, tempering a number of the overwhelming granary and lumberyard notes, although that younger whiskey DNA continues to be totally in impact. Components of popcorn are evident on the nostril, and a wholesome peanut shell notice hits the palate, alongside some notes of brown butter, baked apple, and a contact of Bit-O-Honey character, all proof that this bourbon is maturing in the best route, if ever so slowly. The end stays heavy with toasty barrel char, nonetheless, with hints of darkish chocolate finally percolating on the end. As with the rye, one other 3 to 4 years ought to see this actually beginning to come into its personal, although the bourbon will clearly get there sooner. 100.1 proof. Reviewed: Barrel #13102. B / $100