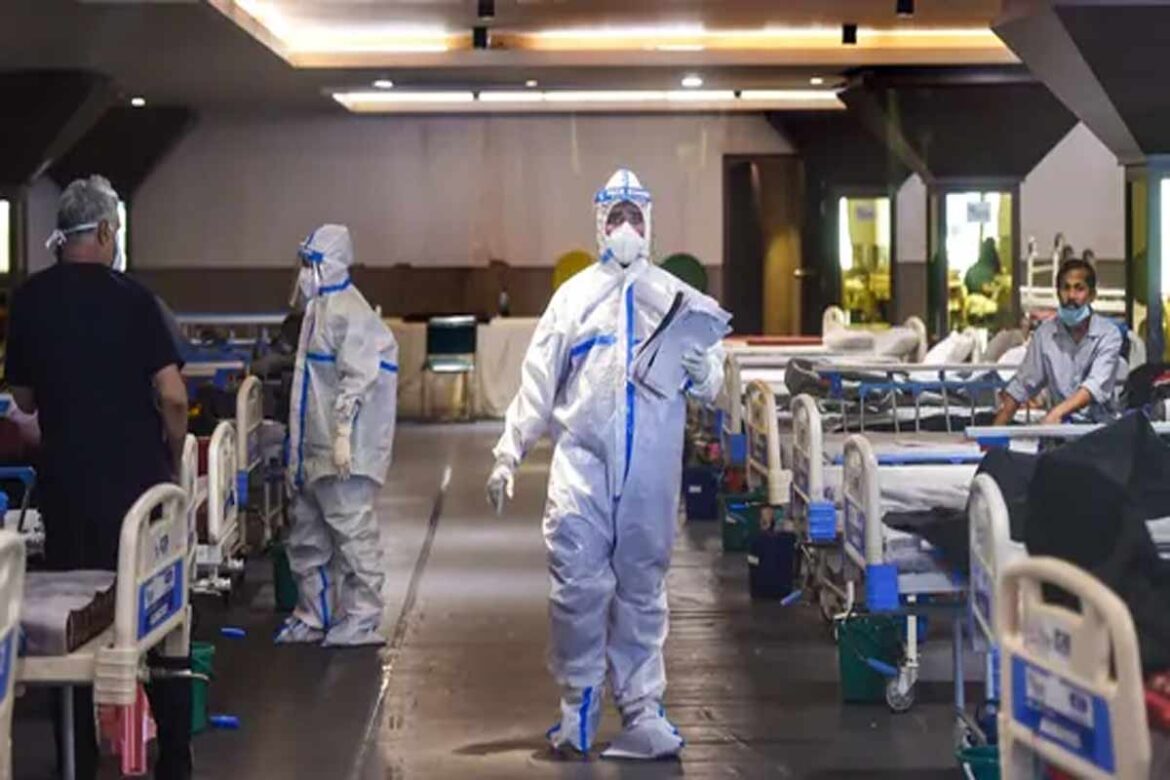 Several states have reported deaths of patients due to a shortage of medical oxygen in the last few days. (Photo source: PTI)

Coronavirus (Covid-19) Cases and Death Toll in India Live Update: With no let-up in the second wave, the Centre has asked all states and Union Territories (UTs) to take strict measures at the local level to snap the chain of coronavirus infection. In a communication to all states and UTs, the government said that they must implement an intensive, local and focused containment framework. Considering the unprecedented spike, several states have already started imposing stricter restrictions with Karnataka announcing a 14-day shutdown. Delhi and Jharkhand have already announced such restrictions and several other states are ensuring strict implementation of night curfew and lockdown-like restrictions.

Meanwhile, the Centre has assured that there’s an adequate stock of oxygen and the issues related to transportation is being resolved. “There is absolutely no need to panic for oxygen,” said Additional Secretary in the Ministry of Home Affairs Piyush Goyal. The assurance comes as several states have reported deaths of patients due to a shortage of medical oxygen in the last few days. The government has already banned the use of liquid oxygen for non-medical purposes. However, it later allowed ampules and vials, pharmaceutical and defence forces to use the commodity.

At least 51 more people have tested positive for COVID-19 in Andaman and Nicobar Islands, taking the tally in the Union Territory to 5,716, a health department official said Tuesday. Nine new patients have travel history, and 42 were detected during contact tracing, he said. The death toll remained at 66 as no fresh fatality due to the infection was reported in the last 24 hours. Fifty-three people were cured of the disease during the period, taking the total number of recoveries in the archipelago to 5,520, he said. (PTI)

Thane has recorded 3,102 new cases of coronavirus, taking the infection count in the Maharashtra district to 4,53,689, an official said on Tuesday. Besides these new cases reported on Monday, the virus also claimed the lives of 58 people, pushing the death toll in the district to 7,336, he said. The COVID-19 mortality rate in Thane stood at 1.62 per cent, he added. The details of recovered and under-treatment patients were not provided by the district administration. In neighbouring Palghar district, the COVID-19 case count stood at 79,869 and the death toll at 1,489, another official said. (PTI)

In a show of solidarity, CEOs of some 40 top American companies have come together to create a global task force to mobilise resources to help India fight the battle against COVID-19. A collective initiative of the US-India Business Council of the US Chambers of Commerce, and the US-India Strategic and Partnership Forum and Business Roundtable, the task force during its meeting here on Monday committed to get 20,000 oxygen concentrators to India in the next few weeks, Deloitte CEO Puneet Renjen told PTI. The new US public-private partnership to provide India critical medical supplies, vaccines, oxygen and other life-saving assistance amid an unprecedented surge in coronavirus cases is called the Global Task Force on Pandemic Response: Mobilizing for India. (PTI)

American biopharmaceutical company Gilead has announced steps to expand the availability of remdesivir, a key therapeutic medicine used in the treatment of COVID-19 patients, in India. Remdesivir is approved in India for restricted emergency use for the treatment of suspected or laboratory-confirmed COVID-19 in adults and children hospitalised with severe disease. “The recent surge of COVID-19 cases in India is having a devastating impact on communities and has created unprecedented pressure on health systems,” Johanna Mercier, chief commercial officer of Gilead Sciences said on Monday. (PTI)

The current COVID-19 crisis of huge number of daily infections in India is something that has already happened elsewhere in the world, South African Health Minister Zweli Mkhize said here. The minister appeared on the national public broadcaster, SABC, on Monday morning, where he was asked why the extensive vaccination programme in India had not stopped the current surge. “Different countries have had the same experience. While they are going through the vaccination, the next wave was coming through so you cannot necessarily say that the vaccination will stop it,” Mkhize said. (PTI)

Congress national general secretary Ajay Maken on Monday asked the organisation and Rajasthan government to work to save people from the current crisis arising out of the coronavirus pandemic. Maken, who is the AICC in-charge of the state, was reviewing the work done by the state government and the party state unit in an online meeting to provide relief to people affected by the pandemic. Maken said the Congress government in the state did a great job during the first wave of the pandemic that had been praised by a body like the World Health Organisation (WHO) and the model here has been adopted in many places in the country and abroad. (PTI)

The authorities have directed for converting 100 rooms of Ashoka Hotel in Lutyens’ Delhi into a COVID health facility for high court judges, judicial staff and their families. In an order issued by the sub-divisional magistrate of Chanakyapuri on Sunday, it was stated that the COVID facility at Ashoka Hotel will be associated with Primus Hospital. The hospital will run the facility at Ashoka Hotel and also handle the biomedical waste disposal. The staff of the hotel will be provided all protective gear and given basic adequate training, stated the order. (PTI)

Jawaharlal Nehru University (JNU) will be organising a COVID-19 testing camp inside the varsity campus for the next two days, it said on Monday. Meanwhile, in a circular issued on Monday, the varsity said a curfew will be in force in the university premises from 10 pm on April 26 (Monday) to 5 am on May 3 (Monday) after the Delhi government announced an extension in curfew hours. “However, there shall be no restrictions on movements of persons who are engaged in emergency services, medical emergency and supply of goods during the curfew period on production of valid I-card. Persons coming from/going to airport/ railway station/ISBTs allowed to travel on production of valid ticket,” it said. (PTI)

Samajwadi Party chief Akhilesh Yadav on Monday accused the Uttar Pradesh government of fudging the coronavirus death toll, saying the rush at crematoriums contradicts the data. The former UP chief minister also alleged that the BJP government’s mismanagement and short-sightedness has turned the state into “corona pradesh”. “Fake data is being given to show fewer deaths, while a rush is being witnessed at crematoriums,” Yadav alleged in a statement. “It is the government’s failure that even BJP MPs, MLAs are not satisfied with the current state of affairs. The number of doctors, hospitals and other facilities given by the BJP is mostly fake. Such an insensitive government was never seen in the state,” he claimed. (PTI)

In the last two days, the number of recovered COVID-19 patients has been higher than the new infections in Pune district of Maharashtra, the health department said on Monday. As per the district administration’s health department, while 6,046 new cases were reported on Monday, the lowest in the last several days, 8,823 people recovered from the infection during the day. This pushed the COVID-19 recovery rate in Pune district to 86.10 per cent, it said. On Sunday, while the daily COVID-19 tally was 10,193, the number of patients discharged from hospitals stood at 10,607 in the district. (PTI)

West Bengal on Monday registered 68 deaths due to COVID-19, the highest so far in a single day, pushing the toll to 11,009, the health department said. The state also reported record 15,992 fresh infections, which took the tally to 7,59,942, the department said in its bulletin. Kolkata alone accounted for 26 deaths, followed by North-24 Parganas at 11, South-24 Parganas at seven, Hooghly at five and Malda at four. Of the 68 deaths, 45 were due to comorbidities and COVID-19 was just “incidental”. (PTI)